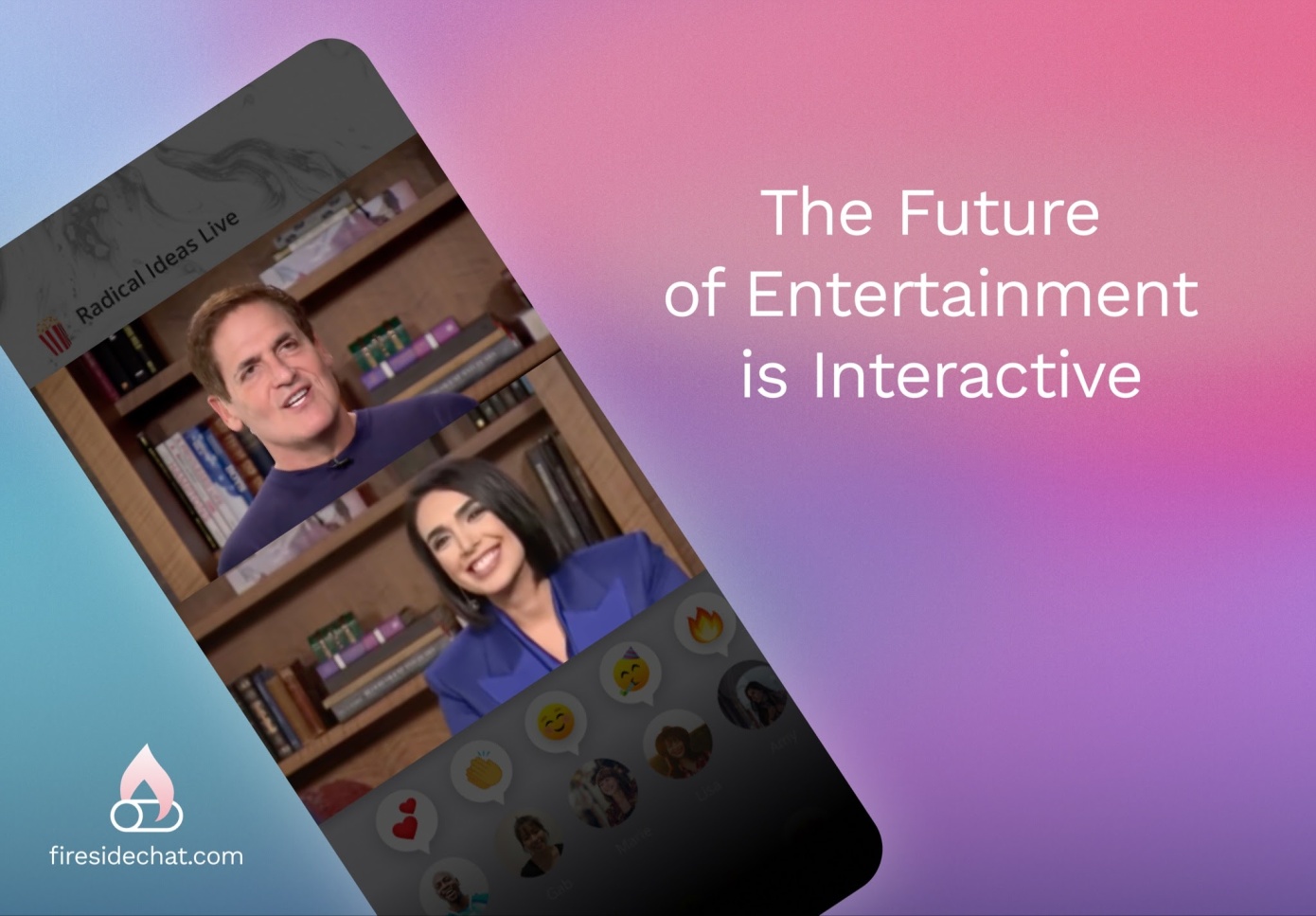 Amid a deluge of new creator platforms, a startup called Fireside is launching today with what it believes will be a compelling proposition for professional creators in need of a more robust set of tools for content creation, distribution, measurement, and monetization. The service, which offers a platform for live and interactive shows, had been making waves during its beta period thanks to financial backing by Mark Cuban, who has also taken the rare step of naming himself as co-founder. He’s joined by former Googler, YouTuber, and Node co-founder Falon Fatemi, who sold her last company to SugarCRM, and early Yammer employee Miek Ihbe.

The platform is now exiting its beta period, where it was tested with over 500 creators whose collective audience reach has topped 100 million, the company says.

While there had been some early comparisons between Fireside and live audio platforms like Clubhouse or Twitter Spaces, hosting live audio content is only a part of Fireside’s feature set. The company’s hesitance to speak about its plans pre-launch, however, allowed rumors to circulate to the point where many seemed to believe Fireside would be yet another Clubhouse clone.

The reality is that Fireside is offering a broader set of services.

The platform today offers the ability for creators to broadcast either live audio or video content, which can be simulcast to other social networks, streamed live in Fireside, recorded, saved, and edited for later distribution to other social platforms or podcast destinations, or viewed on-demand within Fireside itself. In other words, it’s attempting to combine everything that makes participating with live shows engaging with the need creators have to turn that content into something that has a longer life outside of the platform where it was originally hosted or recorded.

Along the way, Fireside also offers a slate of tools for promotion, editing, measurement, distribution, monetization, and audience growth. These aren’t meant to serve only as optional add-ons, but are part of Fireside’s end-to-end content production experience — an experience that creators today often manage today by using a multitude of single-purpose tools. 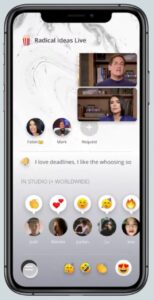 “The biggest challenge to generating quality content is both identifying the best professional creators that can do that as well as attracting audiences. And the reality is the best professional creators are able to do both,” explains Fatemi, who serves as Fireside’s CEO. “The Holy Grail around understanding what makes quality content, or a hit, is understanding how audiences are reacting to it as they’re consuming it live. If you can understand this, you can not just engineer the hits — you can create the hits,” she says.

In Fireside, creators can choose whether they’re hosting live audio, live video, or a combination of both. Like other live platforms, Fireside includes the concept of a digital stage where co-hosts and guests can join the show and the audience react in the form of emojis — like clapping hands, thumbs up, hearts, laughter, and more. The show itself is automatically recorded in high fidelity and a copy is saved locally in case of network issues.

When the recording has wrapped, creators gain access to a transcript and the ability to edit the content before further distribution. In the editing interface, creators can cut out audio or video segments with a tap. This part is aided by how Fireside presents the data it recorded related to user sentiment and engagement. For example, if a portion of the show included negative sentiment or low engagement, a creator may choose to pull that piece out before distributing the show to other platforms. They can also edit the transcript text accordingly. 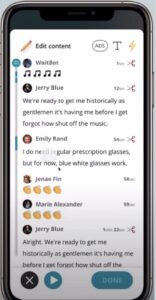 During a live show, the content can be simultaneously streamed to social platforms like YouTube, Facebook, Twitch, or any platform offering a server URL or Stream Key, like Vimeo, LinkedIn Live, and others. (Instagram is not supported as it doesn’t have an open API. But creators so far have been uploading their content as IGTV videos after the fact). When editing is completed, the show can also be distributed anywhere you can upload audio or video content, like social media platforms, podcast services, or RSS (for podcasts). 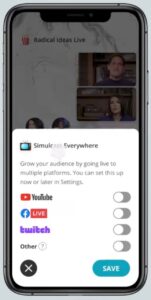 Creators can also monetize their audience directly on Fireside in addition to whatever revenue they’re generating externally on social platforms or through podcast subscriptions. At launch, Fireside aims to support subscriptions and ticketed events where creators set their own prices. It supports in-show advertising in partnership with Libsyn. It plans to support brand integrations, including gifting and tipping. It even supports NFTs. 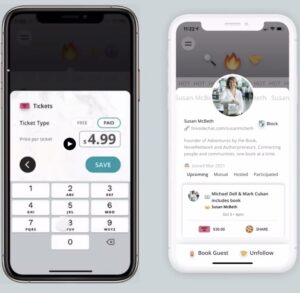 With tickets and subscriptions, Fireside only takes a 3% cut to cover its costs up until the creator makes $30,000 in revenue. It then takes 15% — a decision the company made after analyzing the state of the market and speaking to creators about what they felt was fair.

With NFTs, it plans to allow creators to clip a moment of their show as an NFT and then distribute it to other NFT marketplaces in a few taps.

“We think NFTs are a really powerful vehicle for allowing creators to turn their content into currency,” notes Fatemi, adding that NFTs are a part of “the future of entertainment,” in the company’s opinion. 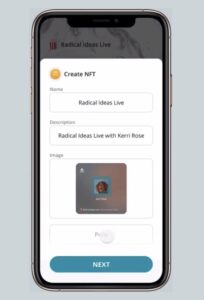 But Fireside, which had been hesitant to talk about its product pre-launch, is still saving some details for a later date. Currently, that includes which specific NFT partners it plans to work with on this feature — one of the bigger differentiators between its platform and other creator tools in its same space.

The company is also unwilling to detail the state of outside investment in its business, though already it’s been established that Cuban has taken a role as both co-founder and investor, and that Fireside was apparently soliciting investment earlier this summer.

Cuban’s role as co-founder is not typical for the entrepreneur turned investor, Shark Tank star, and Dallas Mavericks owner.

“He’s incredibly involved,” touts Fatemi. (Though not so involved as to join a press interview, we should note!) She says Cuban has been offering Fireside great guidance, particularly from the product side of things. “He is an example of someone who’s built a new media empire by themselves. So he deeply understands the challenges that professional creators are facing,” Fatemi adds.

The company is in the process of closing on its Series A, which is why it won’t talk about its backers for the time being. 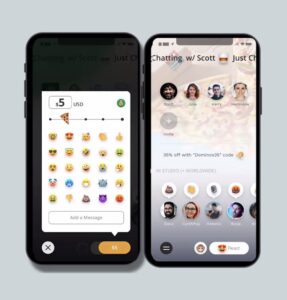 Though now officially launched, Fireside isn’t necessarily wide open to anyone. The creators it’s choosing to onboard must be professionals, even if they’re still in the early days of growing their fandom. So far, the company has been working with creators including Michael Dell, who’s launching a new book; true-crime podcaster Robert Riggs; the cast and creator of “Entourage;” comedians from the Laugh Factory; author and research Daniel Pink; and others.

“We’re looking at [whether they have] invested in their brand and their community. Are they actually content creators…is this what they’re wanting to do full-time?,” explains Fatemi. There’s no requirement to have a certain number of existing fans, she notes. “It’s more about where they are at in their journey and how serious they are in building a media business.”

This focus on pre-vetted professional creators and domain experts, the company believes, may help it to cut down on some of the content moderation issues facing live streaming tools used by the general public. But since even professionals can spread misinformation, Fireside will still need to decide where it stands as a platform in terms of the content it, itself, chooses to host.

“Because of our approach, we haven’t seen many challenges,” Fatemi says, of these sorts of broader culture-setting decisions it will ultimately need to make. “But obviously, as we start to open the platform up more, we need to be very thoughtful about this,” she adds.

Fireside is available on the web and mobile, on iOS.