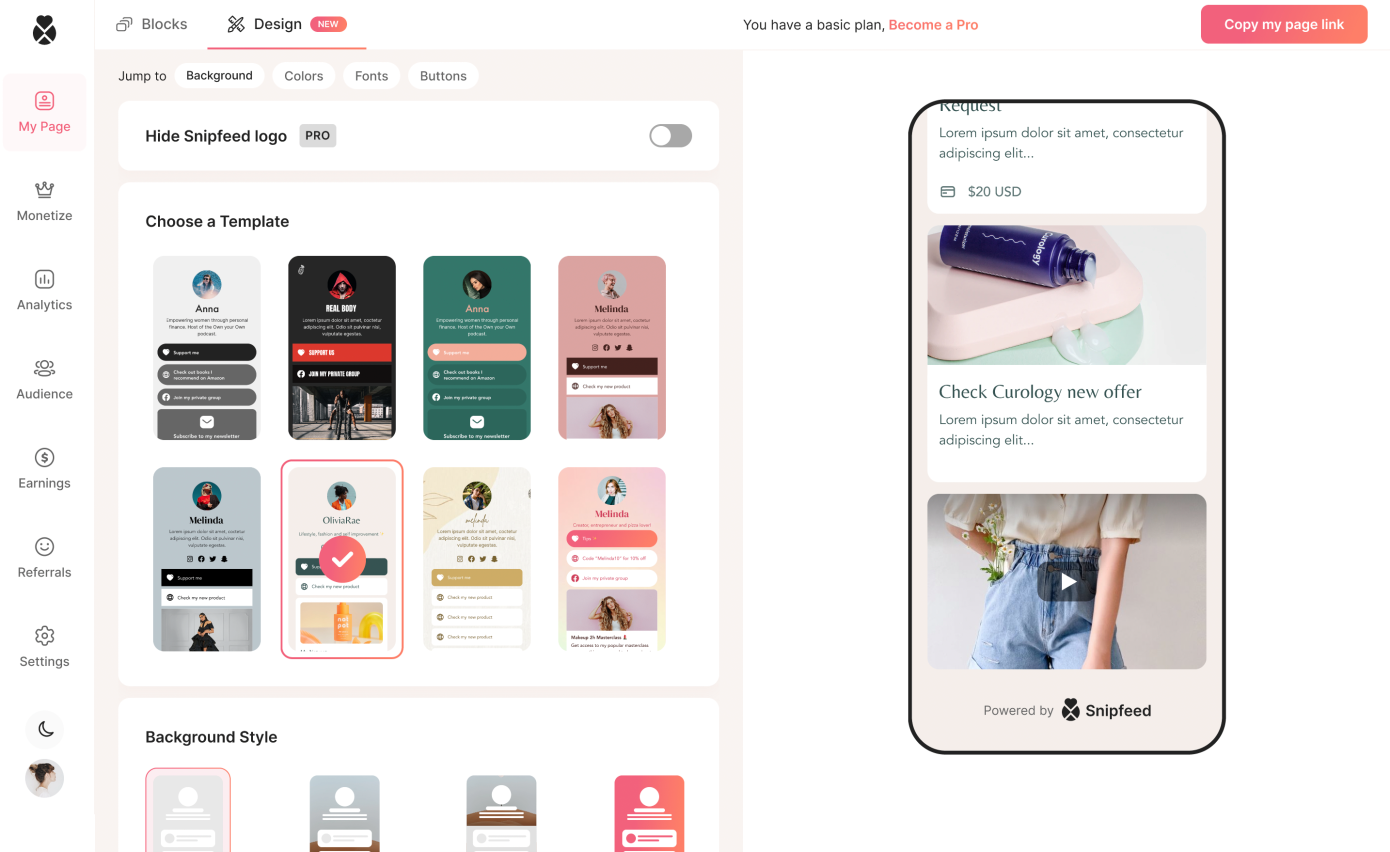 The link-in-bio business is heating up as more mobile website builders compete for a coveted slice of real estate on a creator’s TikTok, Instagram or Twitter. Linktree leads the space, securing a recent $45 million Series B raise to build out e-commerce features, but Beacons boasts competitive creator monetization tools with just a $6 million seed round in May. Now, Snipfeed enters the ring with its own $5.5 million seed round, including investments from CRV, Abstract Ventures, Crossbeam (Ali Hamed), id8, Michael Ovitz (founder of CAA), Michael Bosstick, Diaspora Ventures and others.

Linktree has been around since 2016 and has more funding than its up-and-coming competitors. But for creators seeking to monetize their following, these newer platforms may be more attractive to some creators, since they already have built-in tools to help them monetize their followings. Linktree currently supports tipping on the platform for users subscribed to its $6 Linktree Pro platform, but Snipfeed offers a wider range of monetization options; some creators are making more than $20,000 per month on the platform, according to CEO and co-founder Rédouane Ramdani.

Snipfeed started as a content discovery platform with 44,000 weekly active users — but when Snipfeed added a creator monetization tool to its platform, it became its most popular feature. So, in February 2020, with little to no funding left, the company completely pivoted to its current link-in-bio business. Since then, Snipfeed has amassed 50,000 registered users, with the user base growing 500% in the last six months (Linktree, for comparison, has more than 12 million users).

Based in Paris and Los Angeles, Snipfeed’s 15-person staff is particularly interested in the “long tail” of creators, which it says encompasses more than 46 million people.

“Content creator doesn’t necessarily mean you’re going to be the next Addison Rae or a TikTok star,” explained Ramdani. “It means that you might be a doctor or lawyer, and on top of that, you’re going to have a TikTok where you explain how to file your taxes and that kind of stuff. They have this expertise, and they’re wondering, ‘How can I turn that into a side-hustle?’ ” 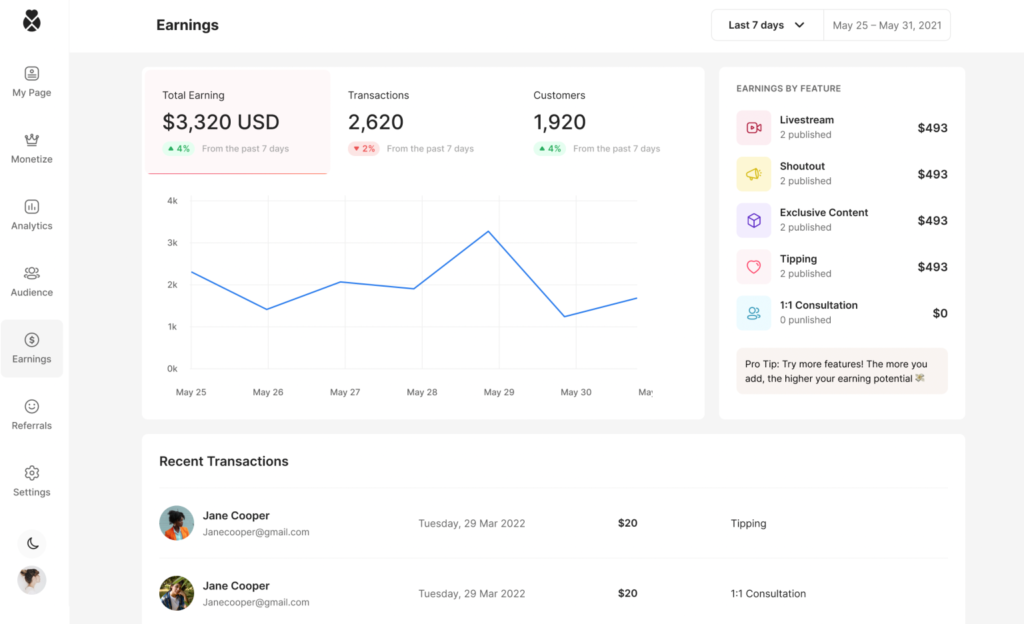 In addition to a standard tipping tool, Snipfeed allows users to sell digital goods, like on-demand video, e-books, access to livestreams and one-on-one consultations. But Snipfeed’s biggest differentiator is its Cameo-like system for selling personalized content. For example, TikToker maylikethemonthh uses Snipfeed to sell asynchronous, video-recorded tarot readings. While asking a single, personalized astrology question costs $5, a more in-depth reading can cost up to $20 or $40.

Snipfeed is free to set up, but if you make sales, the company takes 15% — this percentage is inclusive of any transaction fees. Through Snipfeed’s referral program, creators can make 5% of sales from anyone they onboard to the platform (this comes out of Snipfeed’s commission).

“We decided to go with this model because we really want to have a relationship where we help the creators really make money. We only make money if they make money,” Ramdani said.

If a creator or celebrity were to sell personalized videos on Cameo, they’d lose 25% to the platform. Meanwhile, Beacons takes 9% of sales from its free version, and 5% from its $10 per month version, which offers more customization, integrations and analytics. 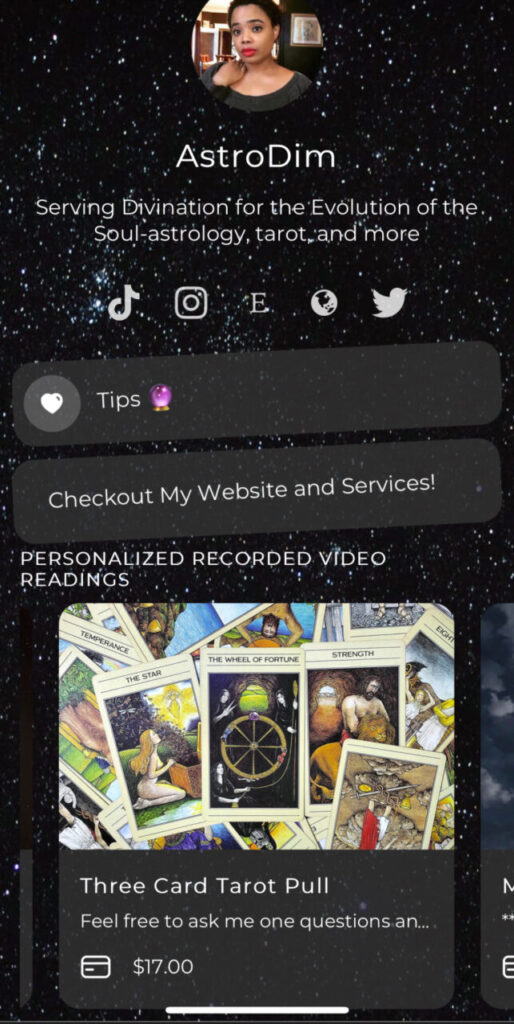 Still, depending on the type of creator, the features that each link-in-bio startup offers might matter more than the cost. Beacons allows users to share a shopping-enabled TikTok feed, which could be a huge money-maker for creators that often share product recommendations with affiliate links, which give them a commission from sales. Ramdani said that astrologers have been particularly successful on Snipfeed, since fans can book a variety of asynchronous services at a wide range of prices. But these features could benefit any creator who can profit from answering followers’ specific questions — a chef could offer recipe ideas based on what’s in a fan’s fridge, or a life coach could make a personalized video if a follower requests advice.

With its $5.5 million in seed funding, Snipfeed plans to build out its e-commerce tools so that creators can sell physical products on their link-in-bio (Beacons and Linktree are also working on this with their recent funding rounds — but Beacons’ and Snipfeed’s seed rounds are small compared to Linktree’s Series B). The company also wants to develop educational content to show its users how to best monetize their platform — if Snipfeed can help its creators make money, then it’ll make more money too.