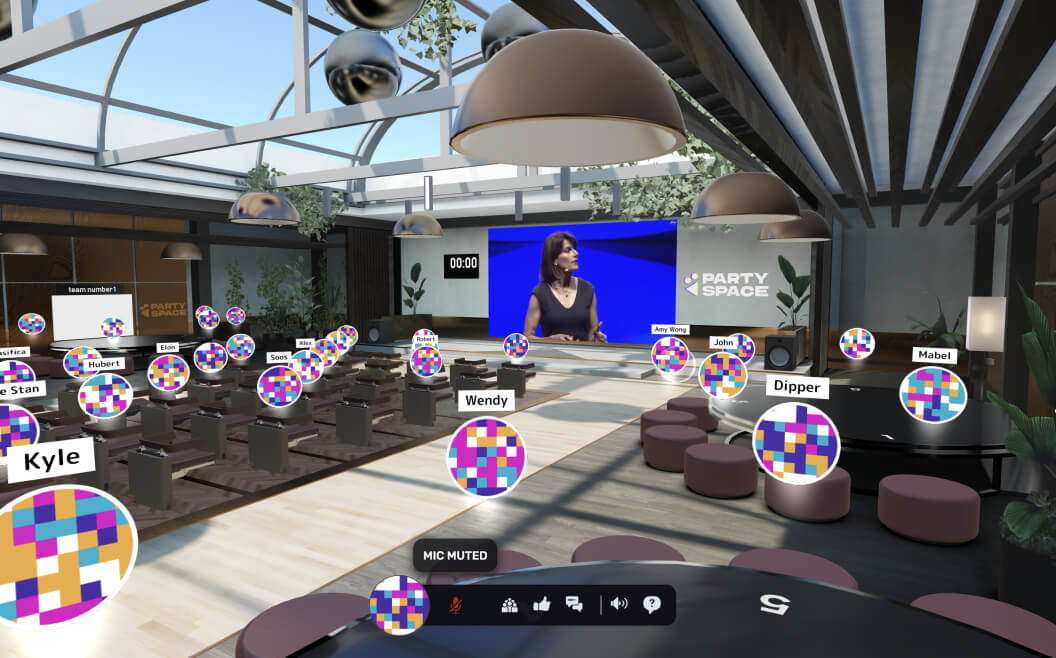 Party.Space has raised $1 million to scale up its metaverse-themed virtual events business.

The company will use the money to scale its sales, explore new applications, launch its first metaverse setting for virtual events, and create a collection of nonfungible tokens devoted to the purpose.

The metaverse is the fabled universe of virtual worlds that are all interconnected, like in novels such as Snow Crash and Ready Player One. And just about everybody in the world wants to be the first to draw consumers to their version of the metaverse.

Yurii Filipchuk, founder of Party.Space, said in an interview with GamesBeat that he got started on the project when his friend said during the pandemic that party chat needed an upgrade because it was so boring to communicate with people via text. The company started in May 2020.

Corporate events are increasingly moving online, not only to connect people during the pandemic but to save money on costs of events at physical venues. The key is getting people engaged enough to stick with them.

“It’s important to speak with your colleagues outside of the office or at least at the watercooler,” he said.

Filipchuk said his company can tell enterprise clients analytics details like how long people stay, how they behave, what types of groups they form, and what kind of content they prefer.

“We can provide all the data that’s very important for companies and for content providers to make it better,” Filipchuk said. “We can create 3D spaces, and we have a gallery of 11 different kinds of venues for corporate and community events.”

People can play board games like Pictionary with each other. Such games can serve as icebreakers for strangers. Filipchuk refers to the platform as more like a microverse, or a small experiment that demonstrated the power of online communities.

The funding comes from TA Ventures, Day One Capital, and Hjalmar Windbladh.

“Our venture fund was impressed by the project team: the level of technology specialists and the speed of the ‘Party. Space’ product are significantly higher than those of other projects in the field of virtual spaces,” said Igor Pertsiya, partner at TA Ventures. “Once you have hosted an event on their platform, you will better understand the idea of the metaverse – an alternate digital reality where people work, play and socialize.”

Party.Space is aimed at creating a sense of presence where companies with large teams can gather together and communicate and collaborate.

Some of the company’s clients include Scaleway, Wargaming, Grammarly, Epidemic Sound, Plug`n`Play, Scania, and DevGamm. Epicdemic Sound’s event had people stay for an average of three hours and seven minutes.

“That’s quite impressive for this community to get people to stay in front of their computers for more than three hours,” Filipchuk said.

They started creating assets for different activities and generated ways for people to show off their photos. They uploaded some memes and emojis so people could use them to communicate with each other.

“Then we started hosting afterparties for virtual events,” Filipchuk said.

The company created features that could appeal to remote teams that have been struggling to do more than just video chats during the pandemic. Some customers asked Party.Space to be more ambitious and create virtual venues that could host 5,000 people.

“We created this idea that we should be able just to move around in bubbles that identify you,” Filipchuk said. “We developed it so that each web page is a separate room for conversations.”

They created rooms with tables where people could sit with each other and socialize. Late last year, one organizer staged an event that lasted for 130 minutes and 75% of all the visitors were actively taking part in various fashion activities. The most popular room so far was a musical bingo room with more than 500 people. About 70 people lined up to be the one in the spotlight during the music event.

“It was quite complicated. One very important part was that we provided the client with analytics,” Filipchuk said.

The focus for now will be on big corporate events, with access via laptops or desktops.

The company is based in Kiev, Ukraine, and it has 23 employees.