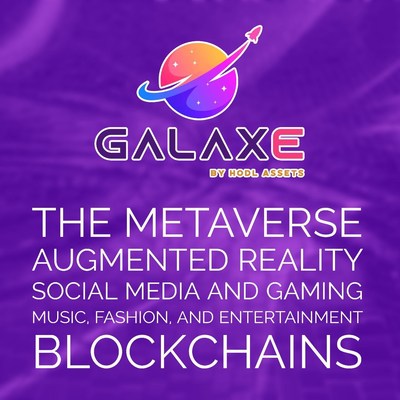 The team now has the needed funds to begin fulfilling its mission of revolutionizing e-commerce by facilitating the wider use of NFTs through Web 3.0, aka the metaverse.

SAN FRANCISCO, Dec. 15, 2021 /PRNewswire/ — The HODL-GalaxE team is proud to announce that through the acquisition of CoinLinked in late August and the launch of the Beta version of the HODL Assets aggregator three days thereafter, the company has raised a combined total of $3M in a seed round led by a number of angel and accredited investors from VC Network, LLC, a virtual “E-Harmony meets Shark Tank” that matches entrepreneurs with VCs and investors from around the world.

HODL Assets co-founder and COO, Jenny Ta, explains: “GalaxE was developed to address the key issues that hinder the current NFT market from fulfilling its massive potential. We focused specifically on finding innovative solutions for several weaknesses we found in the current model, solutions we’re confident will help revolutionize the industry.”

Some of the problems the HODL team has addressed in the new GalaxE platform include the lack of embedded social media, the disadvantages of using a single cryptocurrency (i.e., Ethereum) for payment, the elitism perpetuated by the status quo, problematic security issues that plague the marketplace, and the current overly complicated process of buying and selling NFTs. In Ta’s view, it doesn’t have to be that way, and the rest of the team agrees. And that’s what gives HODL Assets — and GalaxE — the edge.

According to HODL co-founder and CEO Lenny Schutz, the GalaxE platform offers many competitive advantages over the “Big Four” NFT aggregators in the market space: OpenSea, Rarible, SuperRare, and Nifty Gateway. Says Schutz, “Not only is GalaxE the first NFT platform to offer its own native cryptocurrency — the $HODL token — but it also allows users to pay for their NFTs with any of a number of other popular cryptocurrencies, whereas even the biggest competing platforms limit their transactions to a single currency: Ethereum.” He adds, “By removing minting fees for artists and combining multiple services into the first one-universe NFT Metaverse, we increase creative access to the marketplace while providing more features to users than ever before.”

The HODL-GalaxE team is proud of the platform it has built and plans to put the $3M in seed round funding to the best possible use as they continue working closely together to develop additional revolutionary concepts in NFT aggregation.

About GalaxE by HODL Assets, Inc.

HodlAssets.org (or HODL Assets), PARENT COMPANY of the revolutionary GalaxE NFT aggregator platform, was the first to facilitate the creation, buying, and selling of non-fungible tokens on multiple blockchains. In contrast, most other NFT marketplaces support only Ethereum. HODL has also differentiated itself from its competitors by assessing no initial contract, listing, or auction settlement fees, charging its users only a minting fee. The HODL platform is also the first NFT marketplace to offer Gaming and Social Networking as part of its native ecosystem. With every new feature it adds to the platform, the HODL Assets team endeavors to further dispel the mystery and confusion that often surround these wonderfully innovative technologies by providing a safer, more user-friendly environment where people can learn, create, and confidently participate in blockchain-fueled e-commerce and networking. In short, HODL is a place where users are free to explore and enjoy the innovation of today’s most sought-after technologies.